For my family, Oran is a place that you long for, removed from any possible present and future. For me, it’s a post-memory and the need to start a new story. In 1962, Algeria finally gained its independence from France, after 130 years of colonialism and 8 years of war. Reina, my Spanish mother, born in Algiers and raised in Oran during the conflict, migrated to France at her 10 ( after a few months in Spain) in 1962, where she is one of 4-million people directly connected to this troubled transnational history. “Searching for Oran” is a personal journey and a conversation that aims to bring together different voices, generations and territories, from France to Algeria, through Argentina where I migrated more than a decade ago.  By a strange coincidence, the second city called Oran in the world, is located in Argentina, where I live. I propose a journey from New Oran (Argentina) to Oran (Algeria), around migration, identity,memories and colonialism. Searching for Oran” is an intimate and personal reflection, necessary to be able to embrace a collective process with the other heirs. This project is a chapter of a long-term and ongoing visual research and the reflexive basis of the subsequent chapter, "Algeria, a mosaic of heirs", where I go to meet other people like me, from the generation of the after, connected in different ways with Algeria in the French society.

With the support of the CNAP - Center of National Visual Arts

Overlay of an old colonial map showing Algeria as a part of the French territory with a mental map , drawn by Reina, my mother about her memories of the neighborhood where she grew up in Oran and the war.

From a conflictive memory and a land of contradictions :

Family memories made of neighbors and street corners.
Memories of war, full of screams and blood;
Rebellious memories seeking a shared decolonial future after 130 years of French colonialism.

An old picture of my mother house ( on the left) in the spanish and popular neighborhood of Orán, called Echkmul, close to the " plaza de toros". The house desapeared today.

My mother is strong and fearful at the same time. I always thought that her fears and strengths came from the same period, a humble childhood under the sun of Oran, Algeria, happy and hard at the same time. 8 of her first 10 years of life were accompanied by a conflict that turned into a war.

1962 is the end of the war in Algeria and the year of the Independance, but not the end of violence and massacres. Few days after my family left, a massacre happened in their city. I took this picture in a slum in Buenos Aires where I was working. The appearance of this date and bloodstain-like paint stains froze me and are part of these flashbacks I’m working on. Buenos AIres, 2020

"GOING TO SCHOOL, I SAW SOMETHING SIMILAR"

Portrait of Reina in France, 2019 and Collage of a photography of Reina, took on her autorization by French government to leave Algeria as a children, few days before the Independence. It's attached to a google image she sent me from her research when she was trying to explain what she saw one day in her street during the war. The sentence in french, the one she sent me with the picture says : It's something like this but covered by newspapers than I saw. October 2019.

Map of France is the old soldiers unions in Buenos Aires, Argentina

Self portrait with blond hair and a mediteranean light. Marseille, france

View of a photo archive of my mother dressed as a traditional spanish woman, shot in my Buenos Aires’ house. October 2019.

Self-portrait in Buenos Aires and collage with extracts from the naturalization certificate of my grand-fathers ( born in Spain) and my mother ( born in Algeria). One day, I started to question the identity I had built up throughout my french childhood. I discovered a more complex one behind my white skin which allowed me to be the “ideal french girl” during my youth in a popular and diverse Parisian suburb.

There is a very special hour in Buenos Aires, Argentina, of the post-rainy afternoons where the light and the old walls on the terrace of my building is an escape door, temporal and geographic. A light I imagine similar as the one my mother experienced in her childhood in Oran,Algeria.

What is my relationship to this past, where can I stand today and tomorrow? If I’m sure that colonialism, old or new is not part of my thoughts, I wonder how much it has been part of my culture, of what and how I learn to move, live and feel?

While I ask myself this and much more, I keep imagining, dreaming of a possible trip to Algeria even if I don't have my answers ready. This trip starts on my terrace.

Teaser of the project 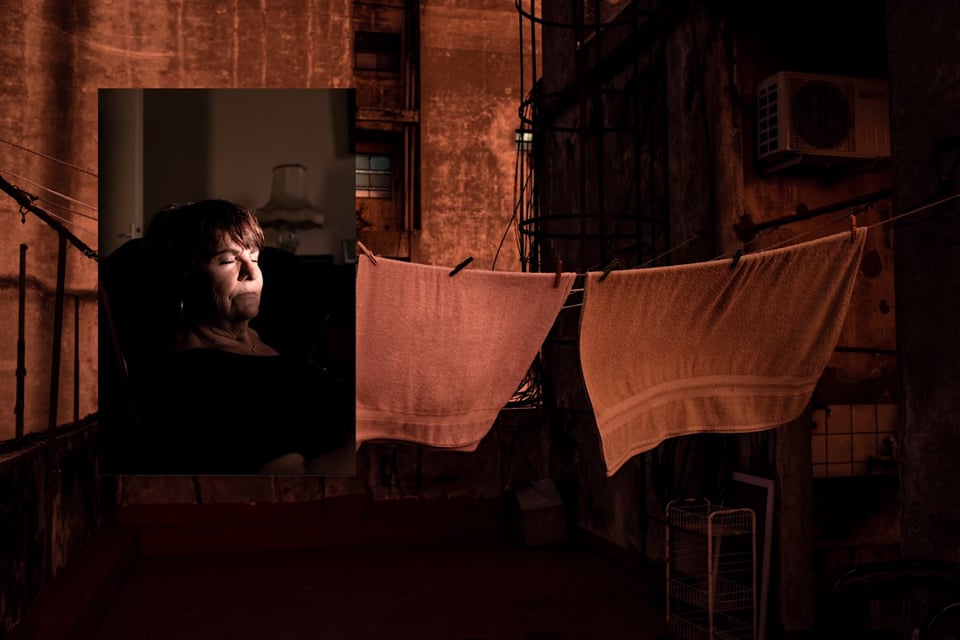